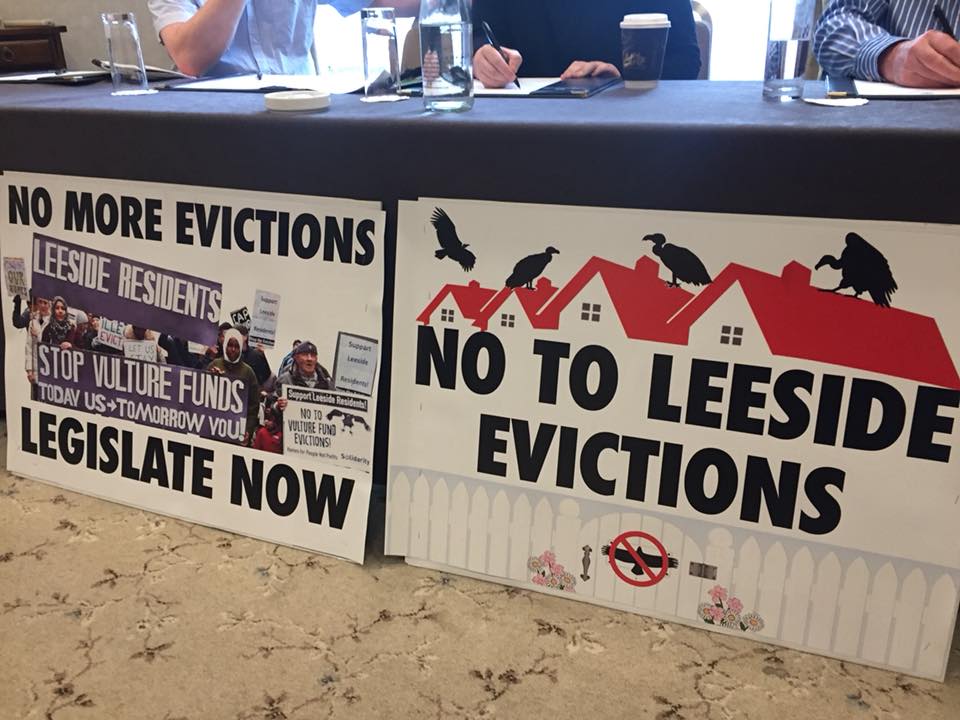 At a press conference in Buswell’s this morning, Solidarity TD Mick Barry was joined by Aimee O’Riordan, a resident from the Leeside Apartments and Father Peter McVerry.

They called on Minister Eoghan Murphy to immediately introduce legislation to prevent mass evictions as has happened in Leeside.

The press conference came in the wake of a ruling by the Residential Tenancies Board which upheld the right of vulture fund Lugus Capital to carry out a mass eviction of low income families from the Leeside Apartments in Cork.

Notices to quit issued to more than 30 residents by Lugus Capital after their 2017 purchase of the Leeside Apartments were contested at the RTB in April and May. There are more than 20 households remaining in the complex who are affected by this ruling.

Aimee O’Riordan, one of the affected residents said “I have lived in the Leeside Apartments for nearly six years now.  I live there with my son Alex who is 5.  The pressure and stress of this situation is interfering with every part of my life.  Alex knows something is going on.  The other day he asked me: ‘why do the men want us to leave?’

“But if it’s bad for me it must be even worse for some of my neighbours.  I have family here that can support me.  But many of my neighbours are from other countries and they just don’t have the same support systems.  Now they are faced with being put out on the street.

“Because there’s little or no alternative accommodation available, every time you go looking the rents are sky-high and there’s dozens of people chasing the one place.

“Politicians have been very quiet about all of this.  Simon Coveney is the most senior Government politician in Cork but we have seen neither sight nor sound of him.  I think he should arrange to meet the residents about this situation as a matter of urgency.”

Solidarity TD for Cork North Central Mick Barry said “The Residential Tenancies Board have given the green light to a vulture fund to evict more than 20 low income households in the middle of the biggest housing crisis in the history of the state.

“If these evictions are allowed to go ahead they will constitute the biggest single surge in homelessness in Cork city since the current housing crisis began.

“The Government must act. The Housing Minister needs to urgently bring forward legislation which blocks evictions of this type.

We need housing for people not housing for profit, the needs of residents and families must come before the profits of the vulture funds.”

“Added to this we have 45,000 householders in mortgage arrears who will likewise often face eviction if and when vulture funds take over their loans. As a minimum we need legislation preventing the eviction of people in these circumstances over the next several years.”