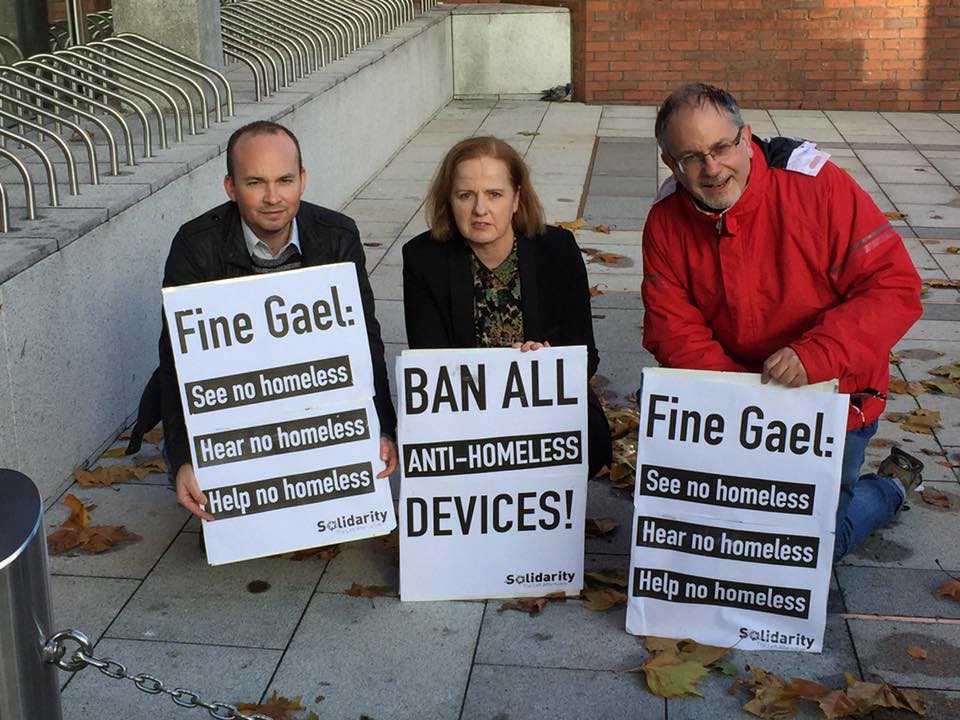 This morning outside Gandon House Solidarity TDs Mick Barry, Ruth Coppinger and Paul Murphy launched the Planning & Development (Amendment) Bill 2017 which aims to prevent the installation of anti-homeless devices, or so-called 'defensive architecture'. This has seen public buildings and companies in city centres install spikes, sprinklers, studs and bars which are intended to deter rough sleepers.

Mick Barry TD said "Despite the protests of the government, there is a major housing crisis in this country. The most visible of which is people who are forced to sleep-rough. This is bad enough without the owners of buildings installing inhumane devices such as spikes, sprinklers or bars to prevent a homeless person seeking shelter outside their building.

"The public debate in the last week around homelessness shows why business owners think it is alright to install such devices. The signal has been given by the government and state bodies that people who sleep on the streets are there through their own fault. That they are a nuisance and problematic people."

Ruth Coppinger TD said "What exactly does the phrase 'defensive architecture' mean? It means installing devices such as sprinklers to saturate a homeless person if they have the audacity to seek shelter in the door way of an empty building. They are defending nothing, they are anti-homeless devices.
"This is disgusting, inhumane and cruel. This Bill will mean that members of the public will be able to lodge planning appeals against the installations of such devices which they believe are only being installed to deter rough sleeping. We hope that this will effectively ban these devices."

Paul Murphy responded to comments made by government ministers and high ranking officials in state housing agencies for comments they made earlier this week.

He said "Leo Varadkar and Fine Gael are homelessness deniers. There is a massive housing crisis. Instead of following the calls of opposition TDs, homelessness campaigners and charities to declare an emergency, they are trying to talk down the issue and minimise it.
"Rough sleeping is the most visible form of the crisis. But the housing crisis is much broader - it includes thousands of people in emergency accommodation, people in insecure private rented accommodation, people who are couch surfing or those trapped living in their parents and unable to start their lives. Fine Gael's 'out of sight, out of mind' approach to the crisis won't work with the public."