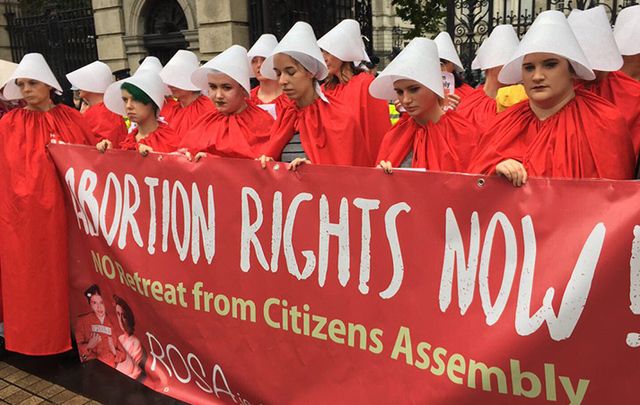 Solidarity TD Ruth Coppinger today publishes a submission sent to to Minister for Health Simon Harris on issues which should be covered in the abortion legislation, which is currently being drawn up, to meet best international practice.
The report which she commissioned titled Shaping Ireland's Abortion Legislation: Current Scientific Evidence and Best Practices from Medical Guidelines Worldwide was prepared by Dr. Abigail Aiken, Assistant Professor of Public Affairs at the University of Texas. Dr Aiken had previously given evidence before the Oireachtas Committee on the 8th Amendment.

Ruth Coppinger TD said "The recent referendum was a resounding endorsement for repeal of the Eighth Amendment to permit legislation for abortion in Ireland. The parameters of the proposed legislation were well known and understood by voters. "This submission, written by Dr. Abigail Aiken who testified to the Oireachtas Committee on the 8th Amendment, draws on best practice worldwide. It makes the case for a patient-centred service that’s fully accessible, with no unnecessary barriers, such as requiring more than one doctor visit.

"There is speculation around a requirement for three visits. This is totally unnecessary, would add to costs and put an additional strain on an already stretched GP service. There is not a medical basis to multiple visits and it will significantly increase cost, while adding unnecessary burden to already stretched GP services. Pregnant people, including thousands of Irish people, have been self-administering medical abortions very safely with medical guidance online for a number of years now. Such abortions are actually categorised as ‘safe’ by the World Health Organisation since 2017. The scale and universality of the Yes vote showed a huge majority believe women and the pregnant person themselves should be trusted.

"This submission also contains details on international best practice for trans-healthcare, conscientious objection and proposals for providing safety from harassment for pregnant people at hospitals or clinics where abortion will be provided."

The full report can be read here