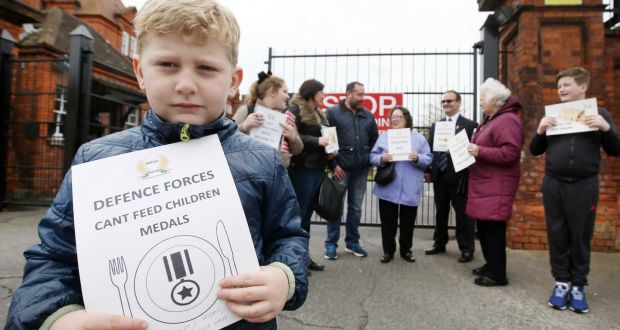 A new report entitled "Workplace Climate in the Defence Forces Phase Two: Results of the Focus Group Research" published by academics from the University of Limerick and based on information provided by 600 Defence Forces personnel between Nov 2016 and Jan 2017 has led to calls for pay increases for the Defence Forces and for them to have full trade union rights.

The report was commissioned by the Defence Forces and reveals a litany of stories about low pay, declining training standards and ever more people seeking to leave.

Another described living quarters for young recruits: "The people from Apollo House wouldn't live in the conditions."

Solidarity TD Mick Barry added his support saying: "Up to one in four members of the Defence Forces are paid so badly that they are entitled to Family Income Supplement. The UL report recommends better pay and it is clear that the issue of low pay in the Defence Forces must be addressed.

"The Minister for Defence and senior ranks in the Defence Forces must act on the issues raised in this report. There should be a significant round of pay increases for the Defence Force members.

"Members of the Defence Forces do not have the right to organise in trade unions or strike against poor pay and conditions. If they had this right, through collective action, they could fight for wage increases and to improve the other issues such as living conditions.

"Solidarity-People Before Profit have moved the first stage of a Bill to give them this right."