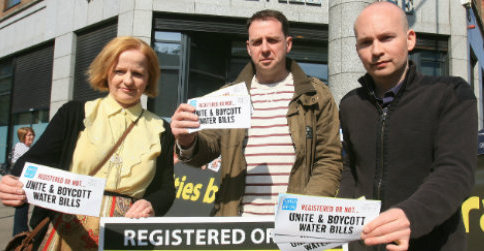 Fianna Fail and the government have been accused of trying to leave a 'back door open' for the possible return of water charges ahead of a vote on the Water Services Bill 2017.

The Bill will officially end the water charges regime which was introduced a number of years ago, it will also allow for a refunds to be paid to those who paid their charges. However, campaigners say that a proposed 'excessive usage charge' is an attempt to keep water charges on the agenda despite the mass movement of non-payment and protest.

Solidarity Dublin South West TD Paul Murphy said "The enormous movement of protest and non-payment of the water charges rocked the establishment and has forced an incredible climbdown. Their plan for domestic water charges lies in tatters.

"The clear demand of the movement was to scrap ALL charges. The excessive usage charge will mean that four person households will be hit with water charges from July 2019 if they use only slightly above the average because the allowance discriminates against larger households.

"There are two key lessons for people - the first is that you cannot trust Fianna Fail. They have broken their election promises on water charges. Furthermore they have happily walked away from what was agreed at the committee. Secondly, and most importantly, is that when working class people across the country get organised we can defeat the establishment."