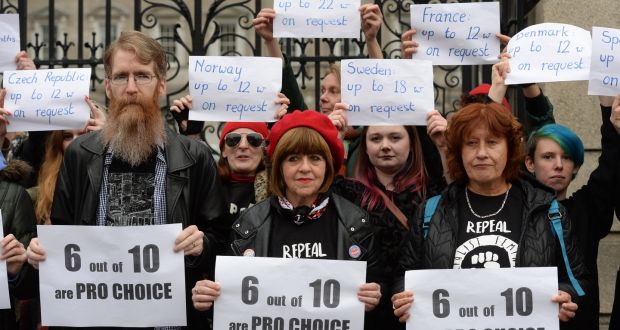 Taoiseach Leo Varadkar was accused of trying to hide behind an 'imaginary middle ground' on abortion rights by Solidarity TD Ruth Coppinger.

It came following comments by the Taoiseach yesterday when he said that the proposal for abortion on request up to 12 weeks 'may be a step too far' for many people.

Ruth Coppinger TD said "After the universal backslapping following the Oireachtas Committee on the 8th Amendment and the talk of 'journeys', we now see the true conservative face of the political establishment re-emerge with the Taoiseach's comments.
"It's ironic that its Leo Varadkar - the young leader, painted as part of a new liberal generation  who is out to dampen women's expectations."

The Solidarity TD said that the Taoiseach's comments and reports from the Cabinet meeting showed that politicians are 'far, far behind' the public on the issue.


"The Citizen's Assembly showed that when ordinary people are given the facts and medical evidence around abortion that they come to the conclusion that a more liberal and progressive regime is needed.
"The Taoiseach, alongside other politicians, conjure up this imaginary, conservative 'middle Ireland' who supposedly support them. Unfortunately for them, opinion polls have shown that 60% of people support the recommendation of 12 weeks on request. There is no middle ground for them to hide behind. It is a figment of the imagination for politicians and some in the media.
"We've had the Citizen's Assembly, the Oireachtas Committee and two opinion polls showing support for abortion rights. There can't be anymore excuses from the government - they must implement the findings."

She said that the abortion rights movement needed to 'keep the pressure on TDs' and highlighted a protest on the issue on the Dail's first day back from it's Christmas break.

''"These comments should act as a warning for the abortion rights movement that we need to keep the pressure on the politicians. ROSA have organised a protest for the Dail's first day back on Tuesday at 1pm to say that nothing less than 12 weeks will be accepted."
Do you like this post?
Tweet