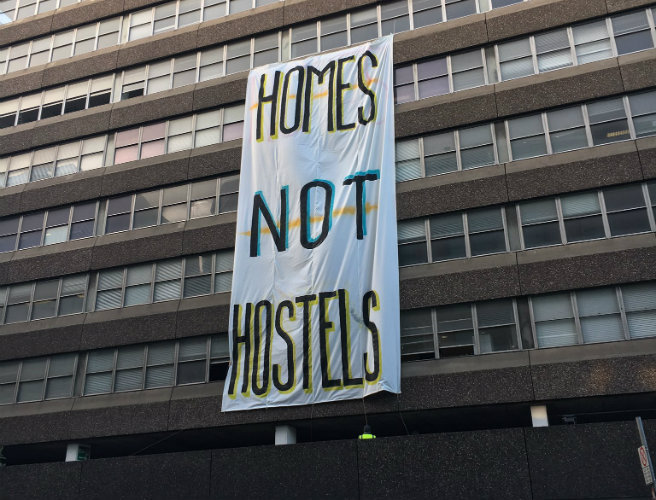 In an interview in today's Irish Times Fingal County Council CEO Paul Reid talked about the difficulty the council is having finding buildings to turn into 'hubs' for the homeless. One such hub cost over €4.5m, but has been described as a "short-term sticking plaster" by Solidarity public reps for the Fingal area. They have called for "radical change" in housing strategy, and "a programme of public home building".

Solidarity councillor Matt Waine said “Fingal County Council would be better off spending time and resources building homes rather than trying to build so-called hubs. For example, to refurbish the premises at the Mater Dei for 50 hubs has cost over €4.5 million. It makes no sense to spend €50,000 on one room in a short-term sticking plaster solution when for €150,000 they could build permanent homes on council owned lands.

“This approach only benefits the private sector and property owners who will benefit massively from it. Once the 3 or 5 year lease is up on a hub premises, they will get a totally refurbished building back, paid for by the taxpayer which they can then rent out on the market. If the council used the land banks which it owns they could directly build social and affordable homes for people. The state and councils building public housing is the only way that the crisis can be resolved.”

Fingal council were also accused of sitting on public land that could be used to build houses. Ruth Coppinger TD said “There is a 90 acres site in Mulhuddart of council owned land which would could provide between 1000-1,500 social and affordable homes.

“If the resources were provided and building was done by the state this could provide 100% social and affordable housing for €150,000 per unit. This would represent a major step forward in alleviating the housing crisis in the area rather than temporary hubs at €50,000 a unit. But, because the government are wedded to private sector, market based solutions it is more likely this land will be given to a developer who in return will hand back between 200-300 homes to the council. In the meantime, the council will look to build hubs at huge costs.

“The government have launched 29 housing plans over the last number of years which have relied on the private sector to solve this crisis but they have utterly failed. We need a radical change in how the crisis is approached and this must be based on the state launching a programme of public home building. The lands in Mulhuddart are an example of what could be achieved if this approach was taken.”