Conor Skehan 'should be removed from position' - Solidarity 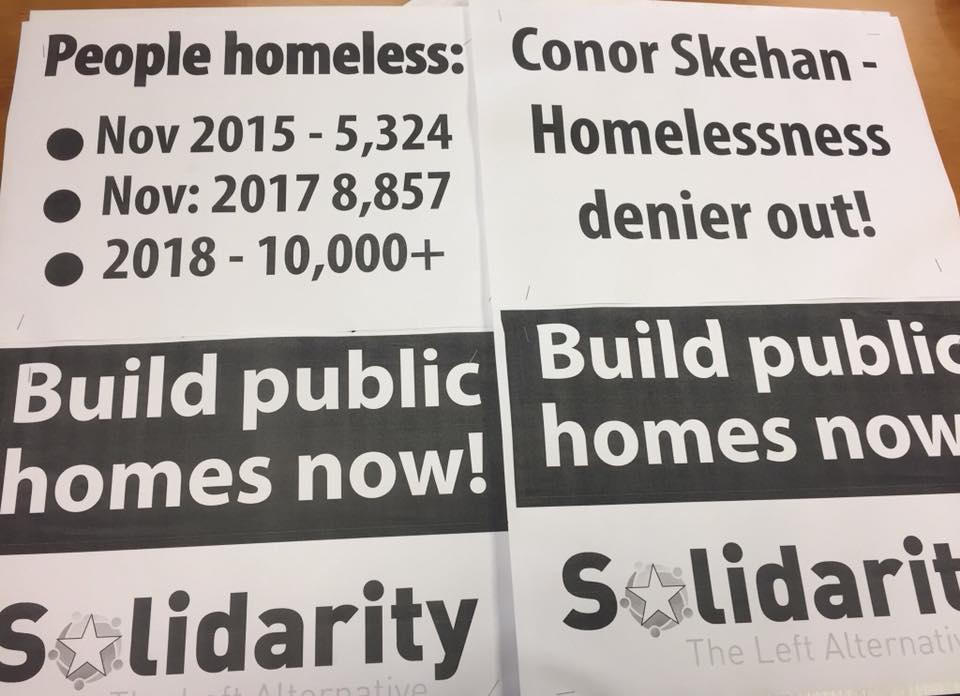 At a protest at the Housing Agency today, Solidarity called on Conor Skehan to be removed as Chair of the Housing Agency. This comes after he accused homeless people of ‘gaming the system’ and said that the record levels of homelessness were ‘normal’.

Ruth Coppinger TD said “In the last few months, Conor Skehan has publicly tried to downplay the scale of the crisis and has accused homeless people of deliberately making themselves homeless. He is a homelessness denier.

The Dublin West TD continued, “He is clearly not suitable to the position of chairperson of the Housing Agency. He has lost the confidence of the public and other agencies who work with the homeless.

“How can someone who in the midst of a national housing emergency describes 3,000 children being homeless as ‘normal’ be part of the solution? How can someone who believes that people are deliberately making themselves homeless be involved in dealing with the crisis?"

Deputy Coppinger claimed that rather than tackle the issues around the housing crisis, that Mr Skehan had engaged in providing 'alternative facts'.

She said "How can someone who in the midst of a national housing emergency describes 3,000 children being homeless as ‘normal’ be part of the solution? How can someone who believes that people are deliberately making themselves homeless be involved in dealing with the crisis?

“He is a homelessness denier. Instead of commenting on rising rents, the lack of public housing or evictions, instead he throws around 'alternative facts' and attempts to blame homeless people for being homeless! How can someone with such a lack of empathy and derogatory views of homeless people be suitable for such a position?"

She went on to question not just Skehan's apparently denial of a housing crisis but also his views on climate change.

She said "Minister Murphy has claimed that none of the other applicants for the position were suitable so he had no option but to re-appoint Skehan. Surely, anybody who actually believes there is a housing crisis would be better suited than Skehan?

"It is bizarre that Skehan, who holds unscientific, backward views on climate change was appointed in the first place to this high profile public position by Ministers who were also responsible for the environment.  These views were publicly known, in an interview in 2011 Shekan stated the following: "Referring to polar bears in the Arctic, Dr Skehan said the only area where they were actually decreasing was “because the tribe of people who live in that area made their living by selling their licences to shoot polar bears to American tourists”. (Irish Times 12 March 2011)

She said that Solidarity would be looking for the issue to be debated in the Dail and for Skehan to come before teh Oireachtas Committee on Housing to explain his comments.

“We will be looking to have the issue debated in the Dail next week. We have also written to the chair of the Oireachtas Housing Committee asking it to invite Conor Skehan in to explain his comments and we want Minister Murphy to come before the committee to answer questions on it."