Abortion is a reality for women in the workplace, colleges and community 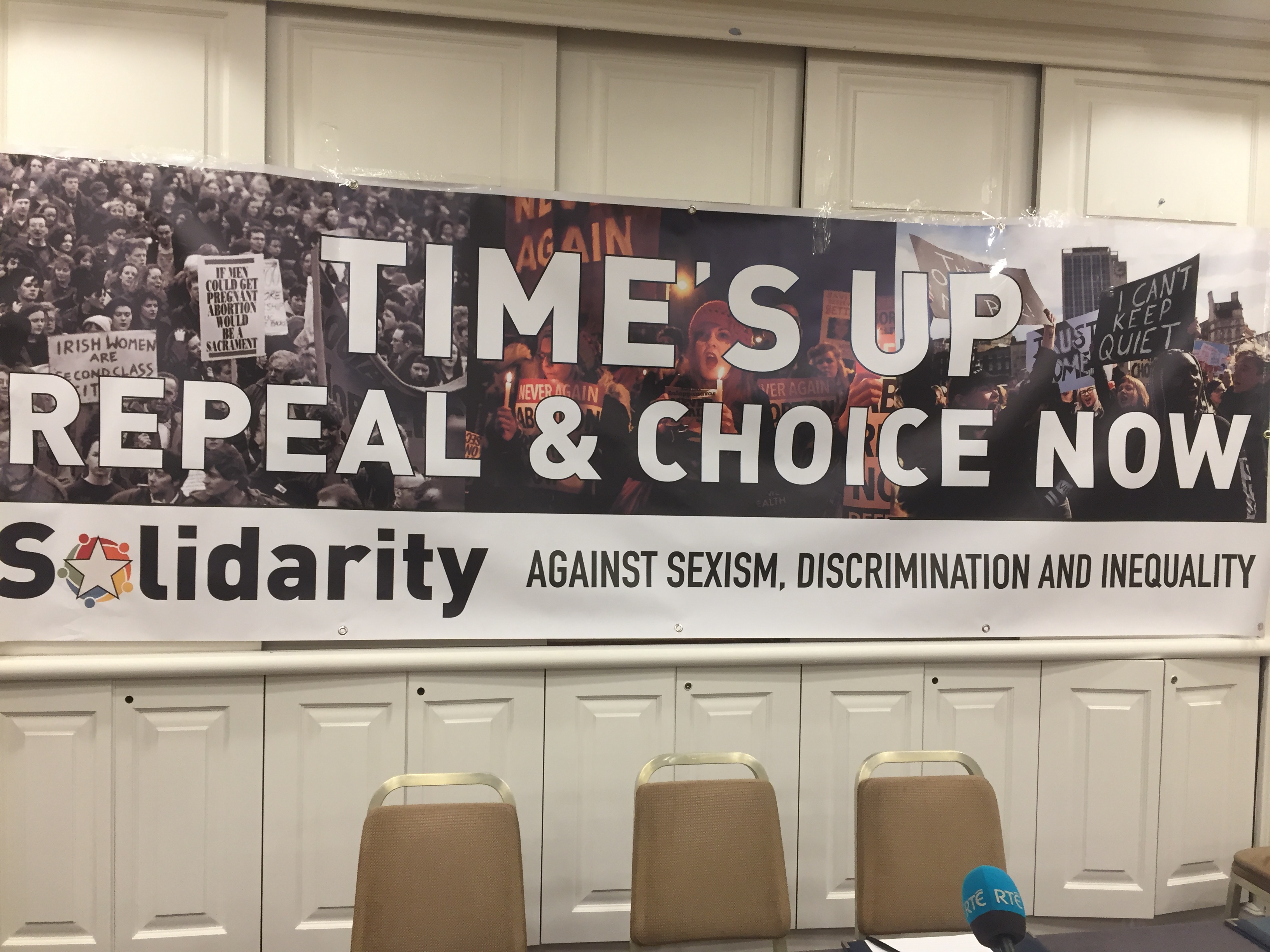 This morning in Buswell’s Hotel, Solidarity TD Ruth Coppinger hosted a press conference calling for a Yes vote in the upcoming referendum.

She was joined by Susan Fitzgerald a Regional Industrial Organiser for Unite, Liza Kelly a community activist from Castleknock, Sandra Fay a school teacher and trade unionist from Jobstown, and Jess Morris a college officer from DIT Cathal Brugha Street.  The speakers gave voice to the reality of abortion in the lives of women in workplaces, communities and colleges.

Ruth Coppinger TD said “Behind the scaremongering by the No side is a thinly-veiled misogyny. Women are either made invisible or demonised by No in this debate. Their needs and rights are ignored.   The trade union movement should actively challenge this on behalf of their women members. Representing tens of thousands of women, the trade unions must appeal to and mobilise their members for a Yes vote for this important civil right and for progressive social change.

“There is an attempt to whip up fears over the prospect of ‘abortion on demand’.  Countries where abortion is legal, such as the Netherlands, have the lowest rates when sex education and contraception are promoted - something opposed by the No campaign leaders. Access to 12 weeks is standard or less than other European countries and the suggestion that, once legal, Irish women will flock to have abortions implies they can’t be trusted.

“The reality of life and the voices of working class women need to be heard in this debate. We hear all the same platitudes from the No side that they said 35 years ago about supporting women to continue pregnancies. It’s never happened. Lone parents are the biggest single group in poverty in Ireland. Two-thirds of Irish women using the abortion pills are mothers already.”

Susan Fitzgerald, an Industrial Regional Organiser with Unite the Union said “‘With more than 700,000 members in over 40 affiliated unions, the trade union movement is Ireland’s largest civic body. Over half the membership are women for whom repressive abortion laws, North and South, are an impediment to full equality: without the right to make decisions over their own bodies, women can’t be truly equal.

“I represent Unite the Union here as a proud pro-choice union. This issue is an important issue for working women, as borne out by the research published late last year "Abortion as a workplace issue" in which 87% of participating members North and South responded they do not believe abortion should remain criminalised. That indicates overwhelming support for Repeal.

“The upcoming referendum finally gives us a chance to remove the 8th Amendment out of the constitution, this is not just a women's issue, it is a civil rights issue that affects all workers. In this crucial last week before the vote, the trade union movement should do everything in its power to mobilise their members to vote "yes” and to counter the lies and misogyny of the no side.”

Liza Riley, a community activist in Castleknock area said "One in three women will experience a crisis pregnancy. The 8th Amendment hasn't stopped women from having abortions, it has simply exported it to Britain. Since the amendment was introduced 170,000 women have been forced to travel to access abortion services abroad.

"The 8th Amendment has caused huge hardship and put financial pressure on ordinary women, most of whom wouldn't necessarily have had easy access to money to travel. It has forced women to borrow and go into debt to access a medical service.

"Many of the same groups and forces who were involved in introducing the 8th, are the same groups opposing its repeal now. Over the intervening 35 years they have opposed every progressive change in society from contraception to divorce while doing little for the women whose lives these decisions affect. They are now resorting to similar scaremongering about abortion, I'd call on people to come out and vote Yes next Friday and support the right of women to do what is right for them when making difficult decisions in stressful circumstances".

Sandra Fay, a teacher and activist from Jobstown said “As a teacher, a trade unionist and a member of the community in Jobstown, I remember the overwhelming support in the area for the marriage equality referendum. This referendum is engendering a similar strong support in the area. Working class women know it is not easy to bring up a child. Women have been one of the groups who have been hit hardest since the recession.

“As a teacher I see the effects of this on my colleagues. New teachers starting off are now paid less than their colleagues because of the two-tier payscale. That is if they are lucky enough to get a permanent position because many are now in reality precarious workers who rely on subbing. They have no guaranteed income. This shows how the cost of travel can be an issue for women in all workplaces.”

Jess Morris, a student activist from DIT Cathal Brugha Street said “This movement is a perfect example of a grassroots, socially led campaign. Students, working class, migrants and more are the people who are driving the repeal movement on the ground day in and day out.

“This referendum has not been won yet and the importance of mobilising the youth over the next couple of days is what will really get us to that momentous change in Irish history. Ireland is ready for a change and this generation will not sit back in the shadows any longer over this. The sheer amount of young people who have been registered over the past couple of months is proof of that, and that had led to an extremely active and motivated generation who are voting for change.”